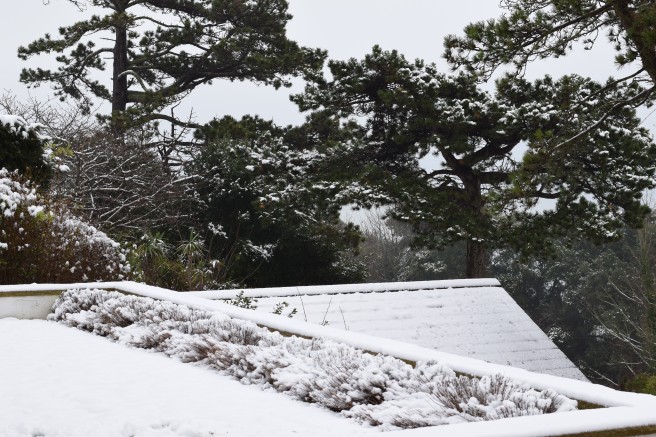 My daughter woke me up at 6.15am sounding much more excited than she usually does at that time of day to tell me we were snowed in. “There’s a load of snow out there, Mum, and it’s still snowing!” Was a snow day on the cards?

Several text messages and pinging on the station run WhatsApp group later, plus constant refreshing of the national rail website to check whether the trains were running, and my two conceded defeat. The trains were running, school was open, it was possible to get to the station in a 4×4 and our neighbour had room to take them in his. Off they trudged, up the path to the gate, rucksacks over their shoulders with a very hard-done-by air. I waved them off, poured myself a large mug of tea and felt relieved that I didn’t have to be anywhere other than here.

It is a pain having a broken wrist and there are things I can’t do but on the upside there are Things I Can’t Do. Like drive. And thorough housework. And anything that requires two steady hands. Luckily I didn’t have any work-work pre-booked in this month (which is good because it’d take me ages) so once the essential household chores are done, I have plenty of time to myself. I can read, watch films and chat to friends and I’ve been doing as much of all three as possible. In addition to the books pictured above, I’ve also read ‘A Man Called Ove’ by Fredrik Backman and ‘A City of Bells’ by Elizabeth Goudge on my Kindle. I’ve been absorbed by them all but if I had to choose my top three, they’d be ‘Someone at a Distance’ (couldn’t put it down), ‘The Music Shop’ (lovely, lovely, lovely) and ‘A Man Called Ove’ (I absolutely loved Ove).

The two cookery books were Christmas gifts. ‘Black Sea’ is a fascinating food/travel book about the countries bordering the sea – Ukraine, Romania, Bulgaria, Turkey, Georgia and Russia – and contains some delicious recipes like Raspberry Buttermilk Tart and Bedtime Pudding with Tahini Cream (there are plenty of savoury recipes too) and foods new to me, like börek (a Middle-Eastern pie) and bulz (a Romanian savoury doughnut). ‘The Art of the Larder’ has been on my wishlist for a while because I aspire to be someone who can rustle up a magnificent meal from packets, jars and tins when supplies are low. Also I want to save money on our food bills. When I’m back in full cooking action, I’ll definitely be making several of the recipes and I’ll report back. This not being able to cook (or, rather, not being able to cook independently) is probably the most frustrating aspect of being one-handed. I’ve a box of Seville oranges waiting to be made into marmalade and that definitely requires two hands! I don’t think I realised before how much a part of my life cooking has become and I miss it. It’s actually best if I stay out of the kitchen while it’s going on…

On to film recommendations, there are only a few because I’ve watched some seriously average films (on Netflix and Amazon Prime) to distract me from pain and to pass the time. Being irritated by a film can be as distracting as completely loving one, I’ve found! However, I really enjoyed watching ‘The Bookshop’ (starring Emily Mortimer and Bill Nighy), ‘The Grand Budapest Hotel’ and ‘The Guernsey Literary & Potato Peel Society’.

TV-wise, I’ve been glued to ‘Les Miserables’ on a Sunday evening (isn’t it fabulous and aren’t they all thunderingly miserable?!), am slightly annoyed by ‘Cold Feet’ on a Monday (I think this is probably a series too far), and have discovered Marie Kondo’s magic tidying series on Netflix. I’d like her to come and meet my house and my husband and children and work her magic here.

I am trying not to miss being able to get stuck in to the garden too much. Strolling around to check up on the snowdrop action and to spot where the bulbs are pushing through helps but there are roses and fruit trees to prune, a greenhouse to clear out, seeds to sow… These jobs will wait, though, and it hopefully won’t be long now before I can spend proper time out there. In 10 days it will be six weeks since the accident and I hope the plaster will be taken off. I’ve been doing my finger and arm exercises and eating bone-building food full of calcium, vitamin C and protein to speed things along. Fingers crossed (on my left hand!).

I hope January is going well where you are and that you’re having a good week. Bye for now.

Please leave a comment if you'd like to. I love reading them. Making connections with people is the nicest part of blogging. Cancel reply

This site uses Akismet to reduce spam. Learn how your comment data is processed.