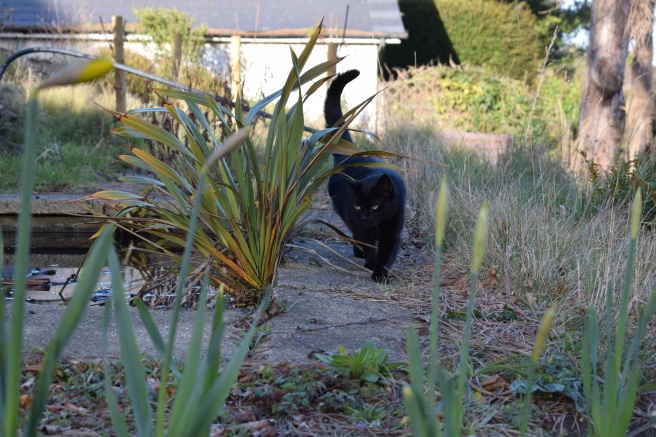 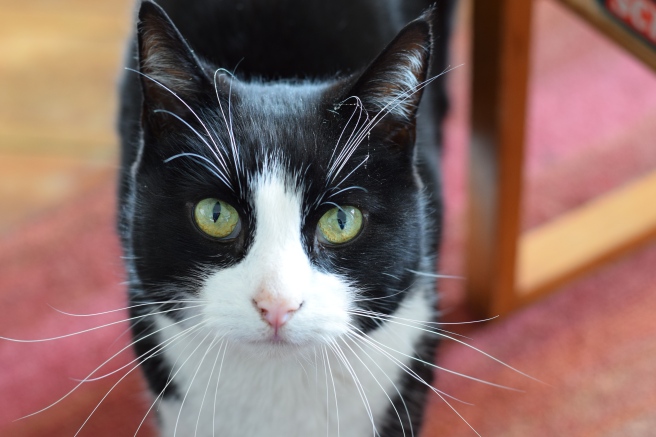 At the risk of opening a large can of worms… We have two rescue moggies who the children love; who David keeps threatening to make into slippers; and about whom I have extremely conflicting feelings. Being a cat-owner and a nature-lover is not easy. I will let the cats sit on my lap and stroke them, I feed them, take care of their vaccinations, etc, but I absolutely hate their cat ways: despite the fact that they’re extremely well fed, their hunting instinct is strong. They catch creatures and sometimes they kill and eat parts of them and sometimes they bring them indoors still alive and kicking. We found a wood mouse nesting behind the freezer (definitely a cat ‘gift’), we’ve searched for hours for the source of the ‘back of the throat’ smell of dead mouse (if you’ve ever smelt it, you know what I mean), we’ve chased shrews up the stairs (yes, they can climb very well), we’ve been woken up by rustling in our bedroom (another wood mouse), we’ve had newts carefully deposited on the kitchen floor with a puddle of pond water, ditto goldfish, and a rabbit in the garden (see my previous post). We’ve found parts of dead rodents and even slow worms by the back door where the cat flap is.

Worse than all that for me, though, is the fact that they hunt, catch and often kill birds. I’ve found dead baby robins, wrens, blackbirds and even a blackcap. This does not sit well with my ex-RSPB staff credentials at all! In the past month, one cat has carefully carried indoors a robin which it deposited, still very much alive, under our bed and a coal tit (again, alive) which it took into my daughter’s bedroom. Luckily, in both instances, we clocked this happening and managed to open the upstairs windows so the poor creatures could fly out.

As it’s breeding season I’ve added ‘vigilant cat watch’ to my daily list. There are birds nesting in the garden hedges and one pair in particular that we’re on high alert for. Coal tits are nesting in a hole in the wall by the back door where the cat flap is… There are definitely chicks in the nest (we can hear them) and the parents have been diligently feeding them. We’ve watched the adults flit from the cherry tree to the fence, to the honeysuckle that’s overhanging the wall and then, when the coast is clear, zipping into the nest in the wall. The cats, however, know they’re there. They’ve been keeping watch. And every time we notice the cats hanging around, we’re shooing them away in no uncertain terms.

I know we should probably keep them indoors for the next couple of months (or even for the rest of their lives) and dust off the litter tray but they would go bonkers. They are very outdoors cats and no-one is volunteering to deal with the cat poo; it’d be down to me. So, there you have it, I love birds but probably not enough to have to incarcerate the cats and shovel their bodily waste every day. And it’s not that simple. There’s the issue of which cat litter to buy (not sustainable) and how to dispose of it (landfill). What’s more important – protecting a few garden birds from predators or avoiding unsustainable products (litter, bags, etc) and adding to the waste mountain?

Isn’t that a metaphor for the bigger problems in our world – we love the Earth but humans still fly in planes and buy goods wrapped in plastic and use disposable nappies and eat foods containing palm oil that’s farmed on land that used to be pristine rainforest. The latest UN report from an intergovernmental body on biodiversity and ecosystems that flagged up in the strongest terms that the natural world is under threat like never before must surely jolt everyone out of complacency. One million species are at risk of extinction and our wild places are under extreme pressure.

As well as revealing the incredible beauty of Earth, an amazing tv programme is revealing some of the impact humans have on our planet – BBC’s Earth from Space. Have you been watching it? One particular shot of huge fishing boats lighting up the oceans off the coast of Argentina to attract squid (they swim towards the light, which they think is the moon) has stayed with me. Thousands of squid swimming up towards the light only to be caught in massive nets and hauled on board. Thousands and thousands of squid, all to be factory processed and to end up on someone’s plate. Sigh.

There are difficult choices ahead and it’s all bloody complicated but we – governments, companies, people – have to do our best to make the right ones.

Please leave a comment if you'd like to. I love reading them. Making connections with people is the nicest part of blogging. Cancel reply

This site uses Akismet to reduce spam. Learn how your comment data is processed.