Hello, how are you?! It’s been all work and no play for the past couple of weeks here at acoastalplot, hence the radio silence. It’s good to be busy (freelance work tends to be like buses) but I have missed you 🙂 I’ve also found it slightly excruciating (if it’s possible to be excruciated in degrees) being indoors at my desk during some completely glorious weather; looming deadlines meant that I couldn’t down tools and head to the beach with my family at the weekend. But, hey, there’ll be other days.

The garden has had to pretty much fend for itself, so thank goodness it’s finally raining! Hoo-flipping-rah. The sky has been full of grey clouds all day but it didn’t start properly raining until early evening. It’s now bouncing off the skylights and I’m imagining the plants are cheering, especially the grass which has lost most of its green. The snails are probably cheering, too, so I expect I’ll find more destruction in the morning. I must take a photo of one of the dahlias to show you – it’s a poor dahlia skeleton. Curse those slimy creatures.

These photos were taken in the garden just after the garden safari weekend. We were still planting, moving rocks and laying paths right up to the night before, but it all went well and we had lots of lovely people through the garden, met new neighbours and locals we hadn’t met before, and chatted to fellow keen gardeners. It was lovely to be able to take a breather and to enjoy being in the garden and we even managed to visit a few inspiring gardens recommended to us. A decent amount of money was raised for the hospice and everyone declared it a success. Looking at the photos, it’s amazing how much everything has settled in and grown since they were taken. The little orchard area is now full of wildflowers, the ornamental grasses and perennials are filling out, we’ve courgettes, tomatoes and squashes growing like crazy, and enough flowers to keep me in vase material for a good while yet. I can’t wait to have time to get out there again. When it stops raining.

Have a lovely rest of the week. More anon. x 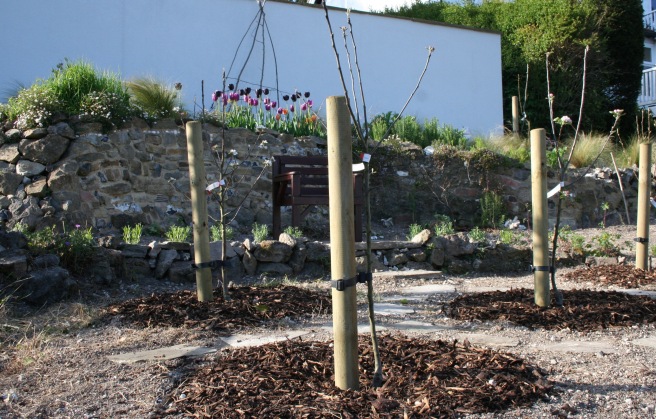 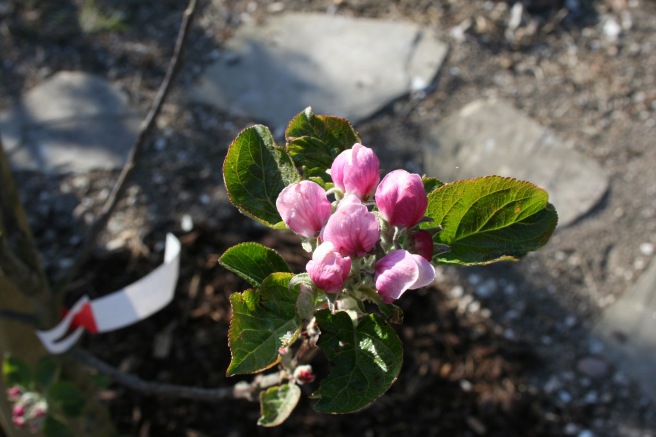 What do you imagine when you think of an orchard? The word has such idyllic connotations for me. It conjures up a particular image in my mind’s eye: dappled sunlight from a late-afternoon sun filtering through rows of gnarly old fruit trees, a blackbird singing its heart out, a gentle breeze moving the long grass which is dotted with wildflowers, the scent of ripening fruit in the air. It’s a serene scene and just the thought of it cheers me. There is an actual, real-life place that almost lives up to this – the orchard and meadow at Great Dixter. My heart skipped a beat the first time I clapped eyes on it but it’s too far away to visit often and I don’t think the gardeners would take kindly to me lying about under their trees on sunny afternoons.

My dream would be to have a little house in the middle of an orchard, but in the meantime (and this is very thrilling) we’re creating a mini-orchard of our very own. When we moved here, there were already a few low-growing apple trees, a plum (since gone), a greengage and a pear tree in the back garden but we always had the idea at the back of our minds to plant more at the front.

Our designs for planting the different levels in the front garden (the area that faces the sea) have evolved, as they do, and a few weeks ago we finally reached the decision to clear an area and plant some fruit trees. The end of the season for planting bare root trees (which are cheaper to buy and more likely to establish well than container-grown stock) was fast approaching but we managed to find most of the trees we wanted as 2-year-old bush, bare root stock from Blackmoor Nurseries in Hampshire. We ordered online and they arrived a couple of days later in a big cardboard box.

We ordered three apples, ‘Discovery’, ‘Red Windsor’ and a cooker, ‘Howgate Wonder’, two pears, ‘Beurre Hardy’ and ‘Doyenne du Comice’, and a ‘Victoria’ plum. We couldn’t track down a bare rootstock ‘Catillac’ pear (which I wrote about last autumn here) but I hope we can order one to plant next year in early spring.

We tucked our new trees into trugs of compost while we worked our socks off digging up overgrown geraniums and other plants to relocate, clearing brambles and weeds, moving rocks and levelling the ground. The space was carefully marked out, holes were dug, posts bashed into position, compost wheelbarrowed from the heap, and, finally, we were ready to plant our new trees. My mother-in-law was here at the time and it’s largely thanks to her that we achieved all this in such a short space of time. We truly have no idea where she gets her energy and drive but she galvanised us to get it done. (Our 17-year-old was even enlisted to help dig out an old tree stump!)

The trees are grafted onto dwarf root stock – M26 for the apples and Quince C for the pears – and will need to be permanently staked and they are planted a little closer together than recommended but we’ll keep them pruned so that enough air can circulate between them. They have 2-ft skirts of weed-suppressant fabric around their bases, covered with a thick layer of bark to keep moisture in and weeds down. David has laid a recycled stone path and we’ve sprinkled wildflower seeds on the soil in between. Newly planted trees do take longer to come out of their dormancy after planting, which can delay new growth, but there are already leaves and blossom on the apples and leaves are appearing on the pears. I’ve moved a seat down to the path so anyone going down the steps to see what’s what can sit a while and imagine how it will look in a few years.

Happily, we have had some rain since Monday and more is forecast for tonight, so I hope we won’t be using the hosepipe too much over the coming months. The nursery’s instructions were to remove any blossom and not allow the trees to set fruit in their first year – all their energies should go into establishing strong roots. I’m going to have to steel myself to prune off that blossom this weekend but I’ll admire it a little while longer…

Can you believe it’s  May 1st on Monday?! It’ll soon be time to plant out all the tender stuff. I hope you have a lovely May Day weekend, whatever you have planned.